This poem? Heed it no mind, captain.

There is no poetry for you this morning. It is the thirteenth day of the revolt.

The capital is in lock-down; we have put insurgents to death and martial law is in place.

All fires have been put out, all but St.Fyonne’s Street.

That’s up to you, captain. Let me introduce you to other loyal Trophy-hunters.

"St. Fyonne's Insurrection"  is a playset for Trophy Dark, themed around popular revolt and counter-revolutionary action. What do you want so much, that you are willing to risk your life and the entire fate of your comrades in suffering?

This playset includes the following components:

- We Are How Revolution Dies

Career, backgrounds and Ritual options for counter-revolutionary action. Includes a novel take on Rituals: harness the power of Forest through scribbled words and the emotions poured within.

- Houses of Bone & Shops of Misery

36 things to find when busting through doors or blowing walls.

Simplified companion/skirmish rules for fighting your way through the barricade.s

Put down the last bastion of rebellion in the city, and grease up the engines of oppression.

This game is a "sister" of sorts to the Regicide incursion released on Codex Void.

This work is based on Trophy, product of Jesse Ross and Hedgemaze Press,

In order to download this game you must purchase it at or above the minimum price of $1 USD. You will get access to the following files: 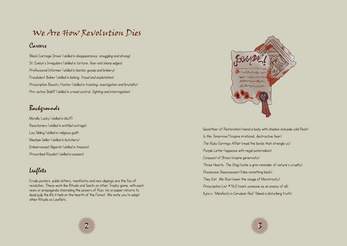 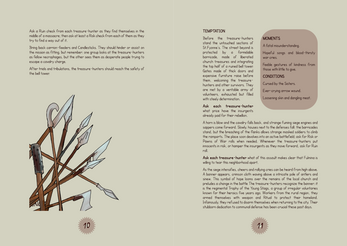